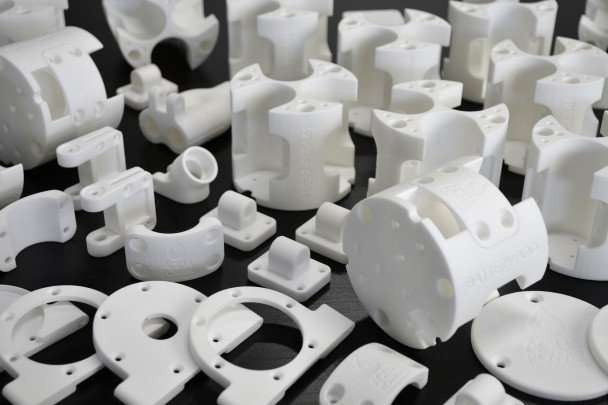 As additive manufacturing (AM) / 3D printing continues to evolve, many of the pre-conceptions concerning its usefulness as a production technology for plastic parts and components need to be revisited. Nick Allen, MD, 3DPRINT UK, reports.

Now an established technology set, with a 30-year plus pedigree in industry, 3D printing is no longer just a solution for rapid prototyping applications. Today, many 3D printing processes, such as selective laser sintering (SLS), co-exist alongside traditional plastic manufacturing processes as a viable alternative, where it can rival them in terms of cost and lead times. For a growing number of applications, 3D printing for batch production offers clear economic and added-value advantages— acting as a spur to innovation and enabling the production of end-use products impossible or uneconomical to produce with the use of alternative methods.

Broadly speaking, when manufacturers look to manufacturing in plastic, there are a range of alternatives to consider. Traditional routes to manufacture typically include injection moulding, CNC machining and/or vacuum casting. Manufacturers that do not bring the SLS3D printing process into the frame at this point are potentially doing themselves (and their bottom lines) a great disservice.

From the get go, let’s be clear, if you are looking to mass manufacture plastic parts and components, then there really is only one viable option, and that is injection moulding. Injection moulding is precise and extremely repeatable and can process a huge range of plastics, as well as being fast at the actual production stage, and when the volumes are high enough, it is characterised by extremely low cost per part. Injection moulding’s Achilles Heel, however, is its high set up costs and the lengthy lead times to get to the production stage due to the necessity for steel tooling, which is often intricate in nature.

When looking at lower volume runs, traditionally manufactures have looked at CNC machining and/or vacuum casting. As a way of avoiding the need to produce costly and time-consuming tools for injection moulding, when the required run is low enough, these methods can offer an economical option but come with limitations of their own. Machining is a process that is restricted to relatively rigid materials; soft and flexible plastics do not machine well and produce inferior results. Vacuum casting works well with elastomer materials, however the process is not conducive to producing parts with complex geometries or with fine details.

Because of these limitations, increasingly, manufacturers are assessing the use of SLS 3D printing for lower volume runs as an alternative to CNC machining and vacuum casting, and the reasons for this are based around the increasing sophistication of SLS 3D printing machines for industrial applications (greater accuracy and repeatability), the increasing palette of polymer materials that can be processed, and once again the ability to manufacture without the need for expensive mould tools.

When assessing 3D printing, CNC machining, and vacuum castingas an alternative to injection moulding, generally speaking we are benchmarking processes where the look, feel, and functionality of the end-use parts are comparable on almost every level. Injection moulding, however, allows for the manufacture of intricate parts with tight tolerances, and it is economic to produce parts with ribs, metal inserts, and bosses etc… which would be totally impractical using machining / casting technologies and 3D printing.

With injection moulding, the emphasis is on high volume and repeatability, as a well-made mould tool will last for a long time, and will be producing identical products again and again, extremely quickly and in a broad range of possible materials. The process also produces little in respect of waste, and even sprues and runners can be reprocessed and reused.

The focus when benchmarking injection moulding against alternatives really only becomes relevant when the volume of the run is lower, and/or when there is a requirement for geometric complexity that it is impossible to achieve through injection into a mould tool.

There will come a point when benchmarking alternative plastic manufacturing processes, that the volume required, will mean that the time and cost associated with tool fabrication is uneconomical. An expensive mould tool is cost-effective when it is producing millions of parts, but when runs are measured below around 10,000, the economies of scale change significantly.

At this point machining, vacuum casting and SLS 3D printing demand attention. None of these processes require metal tooling, and they can produce plastic parts with shorter lead times while offering favourable economics.

However, beyond the fact that machining can only be applied to rigid plastics, it is a subtractive process, and large blocks of plastics can be expensive, it results in high scrap rates, swarf removal can cause production concerns, CNC machining time is expensive, production runs for any volume will require expensive robust jigs and fixtures, and the end use product can be compromised by the fact that plastic does not conduct away any of the heat produced during the machining cycle.

With vacuum casting issues arise with applications that incorporate intricate details and / or that require hollowing out. Repeatability is the key issue for hollow parts that need to be cast out, while maintaining tolerances on fine features and thin walls is also extremely difficult.

The SLS 3D printing process exhibits none of the drawbacks associated with these methods, and as an additive process involves littlein the way of waste during production. Of particular interest, however, is that SLSis not constrained in the same way as traditional production technologies when it comes to geometric complexity, and can cost-effectively produce intricate and detailed parts without extending lead times.

When parts become extremely complex, injection moulding, vacuum casting and machining require that individual elements of the finished part are made separately, which demands extra tools and considerable expenditure on finishing and assembly. With SLS 3D printing, the process is much more flexible, and parts can be made in one, reducing the need for assembly, or multiple components can be built within the same build volume on demand, which still requires some assembly but brings significant unit cost savings by negating the requirement for multiple tools.

The SLS 3D printing process is a technology solution that has been around for almost three decades, but its use in industrial applications has changed radically over this period. It is rightly categorised as a disruptive technology, but perhaps uniquely it has disrupted industry twice!

When it first emerged, 3D printing was more typically referred to as rapid prototyping, and it was at the early design stage of the product development process that it disrupted. The ability to have a 3D prototype in hand a few hours after a 3D CAD design was completed meant that various departments that would usually have been engaged sequentially during product development could now work together. In short, your tooling manager could sit early in the design to market process and tell you immediately whether your amazing design could be manufactured, instead of waiting for it to be passed over the wall. The talk was of concurrent engineering, and time-to-market times tumbled, facilitated by rapid prototyping technologies.

Today, the full spectrum of 3D printing processes is used this way and have penetrated deeply into many industry sectors. However, the hype cycle that 3D printing encountered through the middle of the last decade damaged its image as a serious industrial technology leaving it with a legacy of looking like a solution in search of a problem.

Today, this image must be dispelled by anyone involved in low volume manufacturing, as now 3D printing, particularly the SLS process, is disrupting industry in its second iteration, as a bona fide production technology.

If they do not realistically assess the possibility of using SLS as an alternative production technology, manufacturers are genuinely missing an opportunity to make parts and components quickly, cost-effectively and accurately. And you don’t have to invest in the capital equipment in-house to make this move, as there are agencies that exist that have invested in numerous 3D printing machines so that you can subcontract your manufacturing to real experts in the technology. In this way, you also eliminate the necessity to learn a whole new set of manufacturing protocols. Let the agency take the strain!

The key is making the ability to assess the viability of 3D printing for production of plastic parts as simple as possible.

It needs to be appreciated from the start, that additive manufacturing is by no means suited to every application. To assess where the best fit is, you need to factor in all the benefits and the constraints.

First and foremost, consider how big the proposed part is. Pricing is effectively based on size, and as a rule of thumb, the larger the part, the less viable 3D printing is for production. Small components like jigs, fixtures, housings and fittings, however, are perfectly suited to the process.

Finally, what sort of run volume do you have in mind? If you are looking for hundreds of thousands or millions, then injection moulding is your only option. If, however, you want hundreds or multiple thousands of small parts, then you are in the sweet spot for SLS 3D printing as a production process.

Understandably today you may be confused, and in some instances disillusioned, about the role that 3D printing can really take on when looking at production scenarios. There is a lot of work to be done to illustrate that 3D printing is really now established as a viable and robust production technology when used for the correct applications and the sweet spot volumes where alternative processes struggle due to cost, timeliness, and versatility in terms of part complexity.