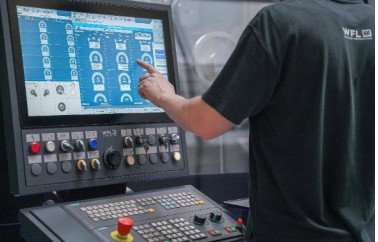 Connectivity across the entire production workflow is a major goal of industrial digitalisation. However according to WFL  Millturn Technologies,  the greatest challenge lies in combining technological expertise from two different disciplines: IT and industrial production.

More and more manufacturers are turning to the use of a single, fully transparent system that incorporates all machine tools, other tools and robots: a trend which will only continue to rise. This is not simply a vision; it’s happening every day. The key to success lies in the use of a phased approach, with the goal being to boost efficiency, productivity and sustainability.

Due to the increasing complexity of machine software and the progressive modularisation of modern production systems, there is an ever-increasing need for far-reaching simulations. The most effective way to test and optimise new or modified CNC programs is through the use of the 3D simulation software CrashGuard Studio. These tests can be carried out at an external programming station or directly on the machine control system itself. By optimising the machining process and ensuring faults are corrected early, users can expect a significant reduction in the risk of collisions and rejects, while also minimising unproductive downtimes. This unlocks new potential and offers clear competitive advantages.

The launch of major release 3 in mid-2019 saw new capabilities added to CrashGuard Studio, including material removal simulation and visualisation functions. As a result, simulations can be carried out more quickly with greater accuracy and increased visual quality. It was also specially optimised to utilise the benefits of multi-core CPUs and GPUs.

Version 3.2.4, which was released in June 2021, later introduced the newly developed functions for modelling and manufacturing plasticising screws for the plastics industry

The fusion of production hall and office

The IT sector is also set to undergo changes. For example, modular machines will be connected through standardised protocols, such as OPC UA TSN, or over wireless protocols like 5G, which will do away with the need for wired connections. Programs that run on industrial control systems and cloud systems will increasingly work in tandem with apps and dashboards. Ultimately, this will blur the lines between the production department and the office.

At WFL, everything is connected, from different production systems, to equipment, raw materials and finished products, all the way to procurement and distribution. This also includes the previously mentioned simulation, production and quick customer support, in addition to the programming of workpieces. Where needed, MILLTURN machines can transmit operation, tool and process data to a higher-level software system for implementation. This data can be transferred by means of simple codes and over bus or network systems as required.

With the new “iControl” process monitoring system, WFL gives the future machine operator a whole bundle of functions to ensure reliable and economical production, particularly in series production. On the one hand, the machine and tools should be used with maximum productivity; on the other hand, the process should run as stably and reliably as possible. The software package that WFL provides for this is extremely diverse and offers a suitable monitoring tool for practically every processing situation. The up to 16 process signals to be monitored are configured by WFL at the factory according to the machine equipment and displayed live on the control screen. Important process signals include the forces or torques of the NC axes and spindles in combination with the respective actual speed values, but also the signals from integrated sensors (vibration, pressure, flow, temperature, etc.). These are built into machine components or tools and can be used for a wide variety of applications such as process control, optimisation or monitoring.

“iControl” provides essential services for automation and series production in particular. However, making the machining process fully transparent is also beneficial for complex internal machining tasks. As the saying goes, once you’ve tried it, there’s no going backAutomated production with robots and autonomous systemWith automated and flexible systems now playing a crucial role in the production of workpieces, a MILLTURN from WFL puts you in the best possible position to deal with the challenges of tomorrow.

Those who aspire to a highly intelligent, automated production system can take a huge step towards reaching their goal, just by bringing in a solution from WFL. For example, the company implements turnkey solutions that connect multiple machine tools.

In addition to the classic handling solutions, WFL turnkey projects are fitted with a higher-level host computer system as standard. This “brain” takes over the entire logic and logistics from within the fully self-sufficient, flexible production cell. The interface is the ProfiNET system, which simultaneously functions as a protocol. This powerful network allows the machine(s) and robot(s) to communicate with each other. In addition to workpiece tracking and tool management, the system also transmits all operational data to the MES system (Manufacturing Execution System,) provided by the customer. In these cases, ETHERNET is used as an additional interface.Servicing and predictive maintenance Servicing and predictive maintenance are becoming increasingly important in production, which is why these are major focal points at WFL. The linking of technologies and their interaction delivers an enormous data pool and enables reliable prognoses to avoid faults before they occur.

WFL is particularly interested in the use of sensors in the machines and the way in which they record and process data. The more heavily sensor technology is used, the easier it is for machines and tools to communicate with each other. This results in a simplified workflow and lower costs all round.

The benefits are clear: the tools and machines communicate in real time, which then improves process monitoring, parameter optimisation, and even the control of speed and feed rates. This allows tools to be used for longer, cuts costs and guarantees process stability. All in all, this fascinating research field is bringing us closer than ever to harnessing the true potential of “smart manufacturing”.