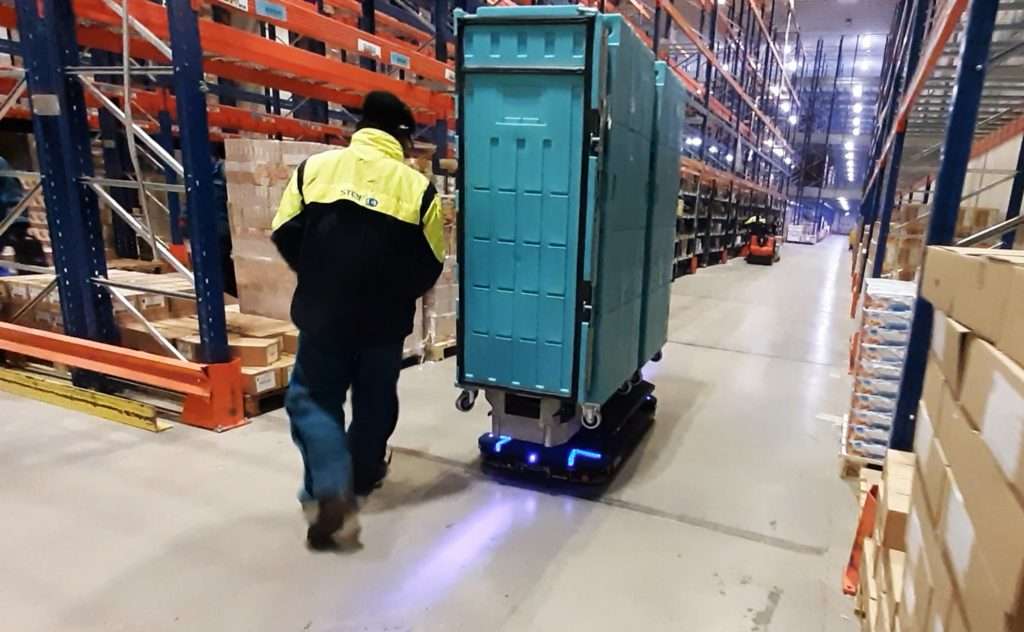 Premium, slimline autonomous mobile robots (AMRs) can carry two roll cages at once in cold stores and ambient warehouses, making them an ideal for boosting productivity in grocery logistics.

IFollow has arrived in the UK intralogistics market to offer premium autonomous mobile robots that will transform order picking and heavy load transport in warehouses and logistics operations. The company designs and manufactures its own AMRs and has already secured a contract with a major UK grocery retailer.

The robust IFollow AMR robots are covered by five international patents and stand out due to their ability to handle two roll cages at once as well as being able to operate in temperatures from -25 to +40°C without degradation of battery life. They are built to withstand travelling on rough floors; being just 17cm high – approximately half as tall as of other AMRs – gives the iFollow robot a further advantage in reducing overall height when carrying roll cages.

Combining camera and QR-code navigation, the AMRs can transport loads of up to 1000kg for applications such as goods receiving, despatch and order picking. Crucially, they can perform these functions in cold stores. The robot has a battery life of 16 hours, which can be extended by opportune charging. A full charge from 10% to 100% requires 1.5 hours.

The compact robots offer easy movement in cramped or refrigerated environments and have the flexibility to transport different storage units such as pallets, trolleys and roll cages, contributing to a reported increase in operational productivity of between 28% and 42.5%.

Frazer Watson, UK – Ireland Country Manager at IFollow, said: “With labour shortages being a major challenge, the ability of IFollow robots to transport two roll cages at once will clearly transform the operational performance of grocery DCs. Designing and manufacturing our own robots and using our own software allows us to meet the needs of individual applications.”

He continued: “Intelligent robots offer flexibility that can be easily adapted to changing needs, which makes iFollow’s technology ideal for supporting post-covid era grocery warehouse operations, which are facing demands for ever-shorter delivery times from growing e-commerce channels as well as store orders.”

Founded in March 2017 by Vincent Jacquemart (CEO) and Nicolas Menigoz (CTO), IFollow has raised €7.5 million in funding led by Supernova Invest, alongside Socadif – taking over from historical seed investors Axeleo Capital and NCI Waterstart, all with the support of BPI France.

The latest round of funding allows iFollow to expand its assembly line, currently based in Gentilly, France. Production is planned to increase tenfold to reach 1500 robots manufactured per year. With over 100 robots already operational, IFollow is aiming to deliver at least 500 new AMRs in 2022.

The IFollow team, which was previously focused on R&D, comprises about 40 employees. The team will be gradually strengthened to reach 80 employees within 18 months with new strategic areas to include: deployment, maintenance, logistics, and marketing.