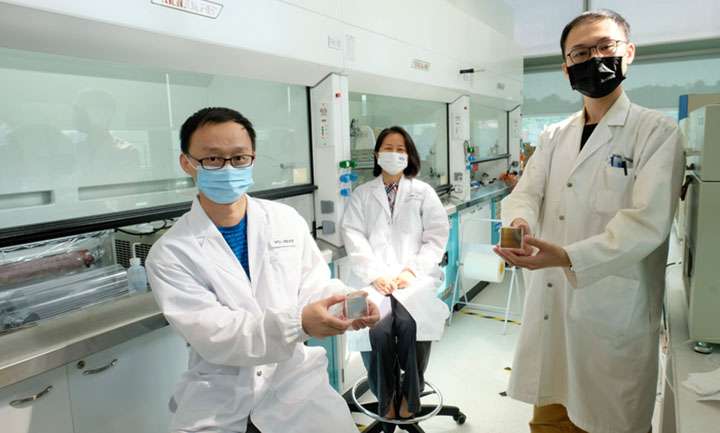 An international research team led by scientists from Nanyang Technological University, Singapore (NTU Singapore) has developed a material that, when coated on a glass window panel, can effectively self-adapt to heat or cool rooms across different climate zones in the world, helping to cut energy usage.

Windows are one of the key components in a building’s design, but they are also the least energy-efficient and most complicated part.

In the United States alone, window-associated energy consumption (heating and cooling) in buildings accounts for approximately 4% of their total primary energy usage each year according to an estimation based on data available from the Department of Energy in US.

This first-of-its-kind glass automatically responds to changing temperatures by switching between heating and cooling. While scientists elsewhere have developed sustainable innovations to ease this energy demand – such as using low emissivity coatings to prevent heat transfer and electrochromic glass that regulate solar transmission from entering the room by becoming tinted – none have been able to modulate both heating and cooling at the same time, until now.

The self-adaptive glass is developed using layers of vanadium dioxide nanoparticles composite, poly(methyl methacrylate) (PMMA), and low-emissivity coating, to form a unique structure which could modulate heating and cooling simultaneously.

The newly developed glass, which has no electrical components, works by exploiting the spectrums of light responsible for heating and cooling.

During summer, the glass suppresses solar heating (near infrared light), while boosting radiative cooling (long-wave infrared) – a natural phenomenon where heat emits through surfaces towards the cold universe – to cool the room. In the winter, it does the opposite to warm up the room.

In lab tests using an infrared camera to visualise results, the glass allowed a controlled amount of heat to emit in various conditions (room temperature to above 70°C), proving its ability to react dynamically to changing weather conditions.

“Most energy-saving windows today tackle the part of solar heat gain caused by visible and near infrared sunlight,” said Dr Long Yi, of the NTU School of Materials Science and Engineering (MSE). “However, researchers often overlook the radiative cooling in the long wavelength infrared. While innovations focusing on radiative cooling have been used on walls and roofs, this function becomes undesirable during winter. Our team has demonstrated for the first time a glass that can respond favourably to both wavelengths, meaning that it can continuously self-tune to react to a changing temperature across all seasons.”

As a result of these features, the NTU research team believes their innovation offers a convenient way to conserve energy in buildings since it does not rely on any moving components, electrical mechanisms, or blocking views, to function.

“To improve the performance of windows, the simultaneous modulation of both solar transmission and radiative cooling are crucial,” said Professor Gang Tan from The University of Wyoming, USA, who led the building energy saving simulation. “This innovation fills the missing gap between traditional smart windows and radiative cooling by paving a new research direction to minimise energy consumption.”

The team found the glass they developed showed energy savings in both warm and cool seasons, with an overall energy saving performance of up to 9.5% (330MWh per year) less than commercially available low emissivity glass in a simulated medium sized office building.