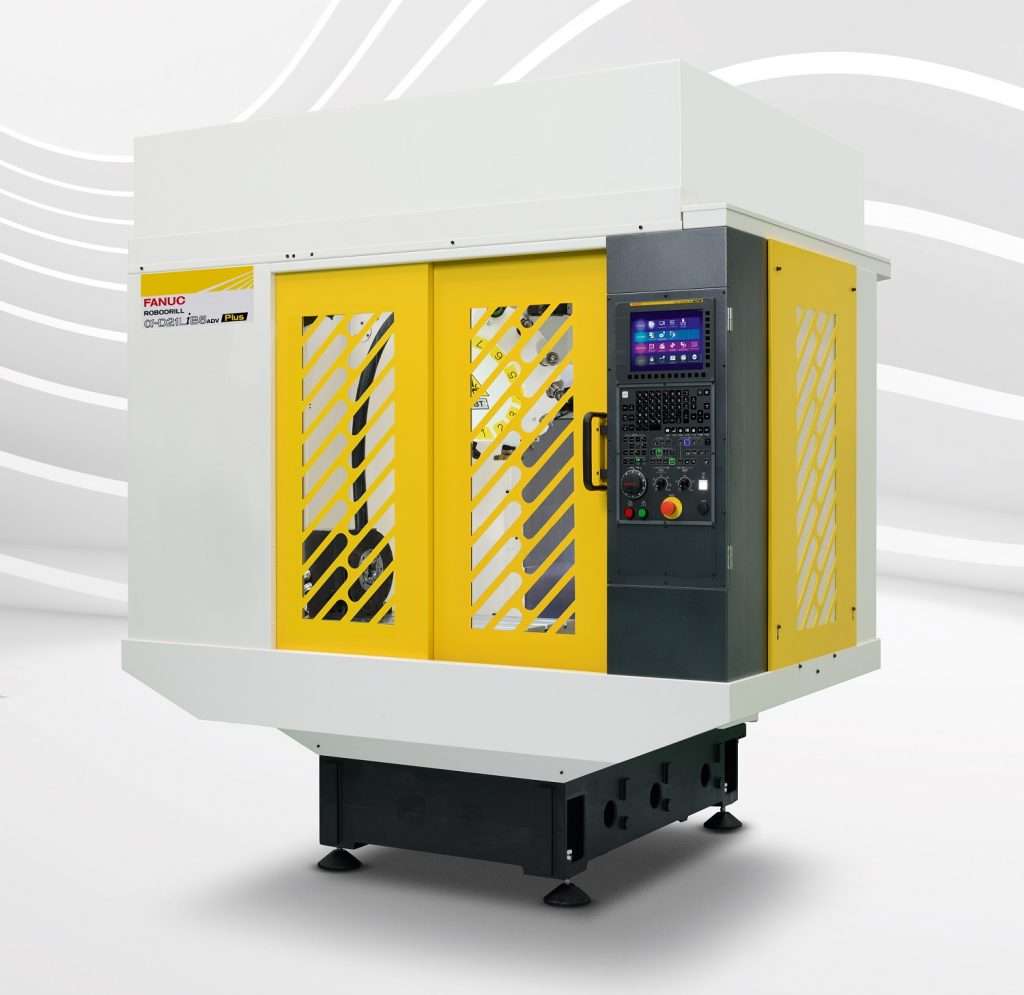 FANUC has announced it has launched four new products in the first half of 2022. The company says its stand at Farnborough International Airshow (FIA 2022) was an excellent opportunity for the international aerospace industry to find out more about some of these new models and understand their capabilities across a range of familiar and novel tasks.

Showcased at FIA2022 for the first time in the UK – the ROBODRILL α-DiB Plus. The 5-axis machining centre features enhancements such as higher spindle torque, intelligent feed control and support for punch tapping. This is FANUC’s latest advanced version of its ROBODRILL, which takes the renowned precision of this series to a new level.

Also released this year is FANUC’s new R-2000iC/190S, a high-precision machining robot designed with the needs of the aerospace industry very much in mind; the ceiling-mounted, fast and precise FANUC SR-3iA/U robot, which eliminates the so-called ‘dead zone’ (areas within the working envelope that the end of the arm cannot reach); and the latest version of the FANUC CR-35iB collaborative robot. Easier to install and relocate within the factory and weighing 62% less than previous models, it is now even more suitable for material handling and transfer, assembly lines, machine tending and packaging.

Tom Bouchier, Managing Director of FANUC UK said: “FANUC’s global success has been built on technological innovation, with a strong commitment to R&D. Over a third of our 8,000 employees are involved in the research and development of leading-edge products. Over 750,000 FANUC robots have been installed around the world. We are excited about our latest models, just launched this year, which offer manufacturers in aerospace and other industries even higher levels of functionality and extended capabilities. The main principles of FANUC’s product development are to increase the reliability of products, use fewer parts and cut costs. These four new models deliver on those principles, in practical and easy-to-use ways.”

The R-2000iC/190S 6-axis articulated arm robot has been designed to deliver high-accuracy component machining, even of challenging materials such as light alloys, aluminium and wood. Tasks such as drilling and piercing are well within its capabilities. It has a payload of 190kg and a reach of 2,040mm, which gives it capabilities beyond other precision models.

FANUC says it has enabled the development of this high precision multi-axis machine through designing, from the ground up, a robot calibrated to deliver absolute accuracy, with iRCalibration Signature technology as standard. The company calibrates every R-2000iC/190S after manufacture, with extremely precise laser tracking. Additional sensors help the robot itself to compensate for distortions caused by the process, leading to outstanding linear and circular accuracy in production. Furthermore, it is designed and produced with high in-built stiffness, for increased accuracy in high-speed applications and tight curves.

The ROBODRILL α-DiB Plus 5-axis machining centre has been introduced in response to customer demand. Its enhancements over previous models in the range include higher spindle torque, intelligent feed control and support for punch tapping. These are all of particular interest to the aerospace sector, where the need for ever-lighter materials is being driven by developments in zero-carbon and electrically powered flight.

The high-torque spindle of the ROBODRILL α-DiB Plus delivers up to 100Nm of force; 70% more than the standard version. It is equipped with intelligent functionality that enables it to sense and react to a rise in torque, such as when encountering a steel insert in a carbon fibre structure. The machine will automatically reduce its feed rate to avoid overload and consequent stoppage, while its Emuge Punch Tap™ tool thread with less rotation cuts tapping time by 75%.

Bouchier added: “The ROBODRILL α-DiB Plus, which is available in standard and advanced versions, is an innovative response to customer needs for intelligent, responsive equipment for today’s lighter materials and components. The advanced version is typically suited to high-volume applications, but both versions have a clamp torque of 1,100Nm, which is ideal for larger workpieces.”

The FANUC SR-3iA/U is a ceiling-mounted, fast and precise SCARA robot; an easy to configure, cost-effective solution for a wide range of assembly, packaging and materials handling applications. One of its key features is its ability to allow access to the whole of its cylindrical working area, thus eliminating ‘dead zones’ that traditional SCARA robot arms are unable to reach. Full access is available in either linear or Cartesian mode.

Bouchier explained: “The new FANUC SR-3iA/U four-axis SCARA robot has a 700mm working diameter, or 350mm reach, which is close to many delta robots Its abilities, plus the fact that delta robots are generally a lot more expensive, makes it a very attractive solution for production lines. What’s more, it has a smaller frame size than a typical delta, consumes far less energy and has services fully integrated within its arms.”

Appropriate applications in aerospace include battery cell, electronic and mechanical assembly, and it will shortly become available for clean-room applications. The robot weighs a total of 27kg and can handle up to three kilograms, with continuous wrist rotation available as an option.

Bouchier added “We are especially proud of achieving a 62% weight reduction with the FANUC CR-35iB – the latest version of the world’s strongest collaborative robot – while retaining full functionality, shortening installation times and improving portability.”

As it does not require a levelling plate or base to counter floor surface inconsistency, the CR-35iB cobot can be floor mounted, while its lighter weight means it is also suitable for motion rails and with mobile robots. Elimination of the pedestal has the additional advantage of reducing its height by 433mm, from 2,288mm to 1,855mm. Furthermore, it is far easier to lift and relocate around the factory, making it even more adaptable to production needs.

As well as being lighter and more transportable, the FANUC CR-35iB cobot boasts a larger range of motion. The J2 axis has been extended from 165o to 215o and J5 axis wrist swing has been raised from 220o to 280o. Its reach is 1,831mm – almost the same as its height – and it can move at 750mm/sec. Featuring FANUC’s ultra-safe Contract Stop Protection and DCS (Dual Check Safety) technology, it is ideally suited for applications including material handling and transfer, machine tending and any task that involves heavy lifting and close interaction with human operatives.

Bouchier concluded: “FANUC continuously strives to improve manufacturing process efficiency. Our mission is summarised in the company’s statement: ‘Reliable, Predictable and Easy to Repair. The aerospace industry continues to face unprecedented pressures, in production and operation. As 99.9% of parts that make up our products are produce by FANUC, we are able to deliver high quality products with longer lifecycles and service intervals, easier integration, and automation set-ups guaranteed to run reliably.”