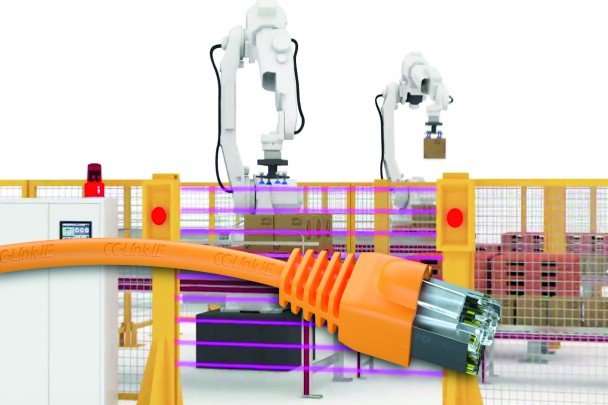 Industry 4.0 can be defined as the combination of “cyber-physical” systems with the Industrial Internet of Things (IIoT). For manufacturers, the combination of improved computing power, sophisticated analytical capabilities and seamless interconnectivity between machines promises a step change in cost, quality and flexibility.

The foundation of Industry 4.0 is the network: the Ethernet and Internet-based technologies that provide the connectivity for everything to communicate with everything else, regardless of the physical location or nature of each system or device. Today, while we talk about high levels of interconnectivity, there are often incompatibilities in networks and technologies that mean projects are divided into separate islands.

As we overcome these incompatibilities and drive ever greater levels of integration and interconnectivity, Industry 4.0 will allow production machines to provide more transparency and cooperate to a higher degree. Some say that this will ultimately lead to intelligent factories capable of autonomous production changeovers, reassignment of production equipment and perhaps even scaling their capacity as demand increases. By extension, this will also take in the Internet and collaboration with vendors and customers to a greater degree than is possible now.

None of this can happen, without the networks to carry the information between the places where it’s needed, however. Ethernet provides a good foundation for this infrastructure, but advanced manufacturing systems will place specific demands on their networks, and not all the available technologies are equally capable of meeting those demands.

One of the key requirements of Industry 4.0 applications is the need to share large amounts of data from multiple devices in real-time. Many established industrial network solutions are built on mature, but relatively slow, network technologies. As the number of devices connected to industrial networks rises, and the volume of data they produce increases, the capacity of these networks can become a key bottleneck.

In the search for additional capacity, there is growing interest in the development of industrial networks based on faster underlying technologies. CC-Link IE, for example, is the first open gigabit Ethernet standard for automation. As such, it offers a performance increase of around 10 times compared older industrial network protocols. The technology provides a bandwidth of 1Gbps, delivering the performance needed to connect the most data-hungry processes together.

Industrial automation systems containing many hundreds or thousands of network nodes place special demands on the physical design of the network as well as its logical operation. Users need to consider the topology of their networks, so that wiring can be managed efficiently. They need flexibility too, since the configuration of production systems may change significantly during the life of a plant.

The basic topologies used in industrial networks are ring, line and star configurations. Different networks permit different combinations of these topologies and in some systems the line and star topologies can also be combined for maximum application flexibility. In some systems, the ring and line connections permit simple “daisy chaining” of devices. That can be particularly attractive in many factory environments since it avoids the added cost and complexity of network switches.

Automation systems require a deterministic communication model, so that control signals reach machines at regular, predictable rate, allowing the production system to remain in sync. CC-Link IE networks achieve deterministic performance using a token passing method. In practice, this allows network update times to occur in a few tens of microseconds, depending on system size and configuration. The system uses a shared memory model in which each device on the network occupies an area of the controller’s memory. To communicate with them, it’s only necessary to change the value of the data in the area corresponding to the relevant device. The network automatically handles the traffic via the standard “cyclic” (synchronous) communication. Redundant controllers can be installed so that production is not interrupted in the event of a controller failure.

Advanced production systems need to share many different types of data in addition to basic control signals, however. Networks must be able to communicate high priority, unscheduled events like alarms, for example. They also the need the capacity to handle larger volumes of low-priority data, like diagnostic information, without slowing or interrupting normal operations.

CC-Link IE delivers this capability with an alternative “transient” (asynchronous) communication method, designed so that even high levels of transient traffic do not affect the deterministic regular cyclic communication, meaning normal system functions are not impaired and the scan cycle is completely deterministic. The system can support multiple protocols, including safety (SIL3), motion control and energy management information on the same network. This reduces costs and increases maintainability. Standard TCP/IP (UDP/IP) packets can also be encapsulated for transmission across the network, allowing non control-related traffic to “tunnel” through the CC-Link IE system.

Finally, a key concern associated with the adoption of industrial Ethernet technologies is cybersecurity. By connecting industrial automation systems to the wider world, these technologies offer manufacturers many new possibilities, but they also bring new threats. Protocols based entirely on a standard TCP/IP (UDP/IP) stack may be particularly vulnerable to compromise by malicious actors, for example, as the technology is so widely used and well-understood. A robust security approach will have many elements, including appropriate design, management and segmentation of networks. The use of dedicated industrial network protocols can also be advantageous, since detailed knowledge of system operation is less widespread.