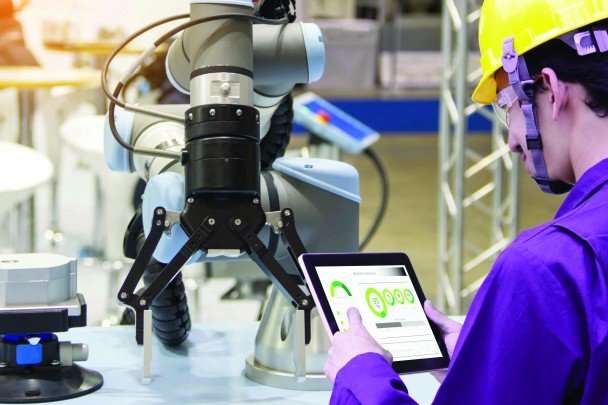 In Sweden, 3rd September is known as Högertrafikomläggningen, because this was the day, in 1967, when Swedish traffic switched from driving on the left to the right-hand side of the road. Following careful planning, faultless execution and compliance by every motorist on the road at the time, the switch aligned Swedish roads with those of its neighbours.

Just like Sweden made a change to fit in with neighbouring countries, manufacturers should implement advanced digital technology to join the fourth industrial revolution, a key driver for improvements in the global manufacturing industry.

Where it all began

Prior to 2011, manufacturers used digital technology to automate individual actions in a factory. They were heavily reliant on engineers to monitor the technology, progress assets along a production line and perform activities that required more cognitive ability than a repetitive physical action.

Dr Henning Kagermann, Dr Wolfgang Wahlster and Dr Wolf-Dieter Lukas recognised the potential of cyber-physical systems, comprising automated equipment connected across the IIoT, to increase the level of automation in manufacturing plants. They presented their vision for Germany’s manufacturing industry at Hannover Fair in April 2011, naming it Industrie 4.0.

German manufacturer Siemens’ four-stage roadmap guides manufacturers through digitalisation and entry into Industrie 4.0. The first stage supports manufacturers in establishing their digitalisation goals. They can then assess their existing IT infrastructure to identify the improvements needed to increase their level of automation. During the third stage, manufacturers create a bespoke digital roadmap charting the subsequent three years of digitalisation. Finally, the roadmap is put into practice, performance is tracked and return on investment is evaluated.

Industrie 4.0 allows manufacturers to shift away from centralised control over production processes — where engineers must program machines to turn blank materials into finished products — to an environment where sensors, software and robots manage processes. Lending greater control to machines results in faster production, higher quality products and cost savings due to improved maintenance and decreased waste. The benefits explain why, since 2011, Industry 4.0 has provided a framework on which other countries have built their own digitalisation initiatives.

Leadership in the Nordics

According to the European Commission’s Digital Transformation Scoreboard 2018, the top five countries on the Digital Integration Index are Denmark, Iceland, Norway, Sweden and Finland. In particular, Denmark holds a strong position in the global manufacturing industry and is ranked first on the Digital Economy and Society Index (DESI), thanks to the Manufacturing Academy of Denmark (MADE).

The initiative is a collaboration between manufacturing companies, five universities and three research and technology organisations. With a budget from 2014 to 2019 of €50 million, provided by the Government and private investment, Danish manufacturers upgraded their factories with connected digital systems.

In addition to internal factory improvements, leading businesses offered practical support to smaller manufacturing companies by visiting their facilities and hosting conferences and workshops. Such outreach activities are essential for digitalisation efforts to benefit the wider industry and economy.

Interestingly, 15 of the companies participating in the MADE programme reported a revenue increase of €135,000 and collective savings of €5.5 million. Danish manufacturers must now ensure the sustainability of the programme if the industry is to advance further.

The USA is the largest economy in the world by nominal GDP. Its manufacturing sector accounts for 11.6% of its GDP, employs over twelve million people and makes up two thirds of all exports.

In the early 2000s, the USA’s manufacturing industry had a strong research and development focus but was less effective at translating new ideas into commercially viable products. It also relied heavily on outsourcing and the growth of domestic industries such as finance, construction, real estate and services.

In 2014, the National Network for Manufacturing Innovation (NNMI), also known as Manufacturing USA, was announced by president Obama at the North Carolina State University, to boost the USA’s manufacturing industry back to a position of leadership.

The NNMI has delivered around 200 major applied research projects so far, which have involved 28,000 people including students, manufacturing employees and veterans. Now, Manufacturing USA must focus on the commercialisation of innovative products to sustain its leading position.

During the twentieth century, the Chinese manufacturing industry introduced digital technology that allowed it to operate highly productive and efficient manufacturing plants. As a result, it became known as the world’s cheap manufacturing nation, but this productivity focus meant the industry became associated with poor quality products and counterfeits.

In 2015, Chinese premier Li Keqiang launched Made in China 2025 to upgrade the country’s manufacturing industry and improve its reputation. Instead of focusing on internal improvements to productivity and efficiency, Made in China 2025 encouraged manufacturers to centre their advancements around trends and themes in the market.

A market-oriented approach to internal improvements allows China to remain competitive in a rapidly changing industry and keep up to date with customer requirements. Digitalisation is an important step, because increasing automation in a factory will generate more time for engineers to focus on new ideas and creative thinking. In addition, advanced technology allows businesses to be more flexible. Machines are now available that can adapt to change, perform a variety of actions and even make decisions based on unique circumstances.

Larger companies should aid smaller businesses in their digitalisation strategies and support education for the next generation of engineers, to secure the future of the industry. Managers should also ensure engineers are provided with enough time to think of creative ideas for improving manufacturing processes and product quality.

The Swedish traffic switch on Högertrafikomläggningen was not as successful as the country had hoped. After a temporary reduction in traffic accidents following the switch, the number returned to the level it was at before. Industry 4.0 will be different — already, initiatives have led to measurable improvements in business revenue and wider economies.

Manufacturers must take inspiration from countries like Germany, the USA, Denmark and China, to keep up with Industry 4.0 and reap the benefits.

To find out more about the ways other countries are digitalising, please visit: www.euautomation.com