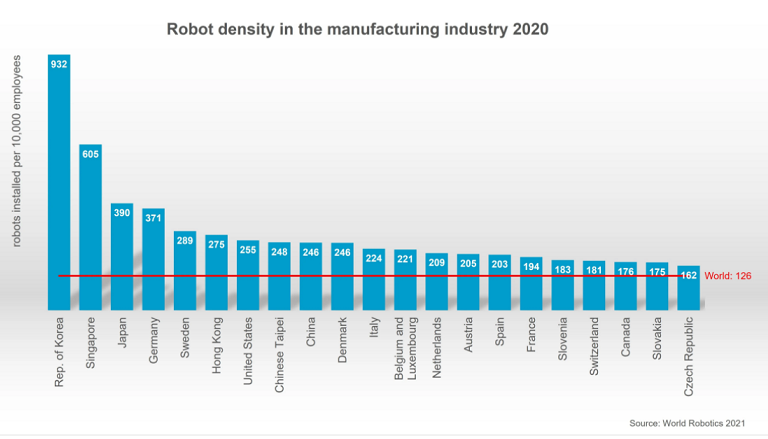 The International Robotics Federation (IFR) has released a press release for its German audience. Andy Pye has a go at translating it for English speakers. Sadly, with a robot density of only 101 units, Great Britain is the only G7 country below the world average (126 units) and thus ranks 24, although  incentives and circumstances may see it move up the league table.

Germany is the most automated economy in Europe: The robot density – the number of industrial robots per 10,000 employees – has risen to a new record of 371 units (2020). With a total of 230,600 units, Germany has a 38% share of the total number of operational industrial robots in Europe. These are results from the IFR World Robotics 2021 Report.

“Robot density is a very important metric to understand the differences in the level of automation in different economies,” says Milton Guerry, President of the International Federation of Robotics.  Worldwide, the average robot density has almost doubled in the past five years and rose to 126 units per 10,000 employees in 2020 (2015: 66 units).

Broken down by region, the average robot density in Western Europe is 242 units, in North America 167 and in Asia / Australia 134. The 5 most automated countries in the world are: South Korea, Singapore, Japan, Germany and Sweden.

France has a robot density of 194 units (16th place in the world). The German neighbours are well above the global average of 126 robots and are positioned in a similar way to other EU countries, for example Spain (203 units), Austria (205) or the Netherlands (209 units). EU members such as Sweden (289 units), Denmark (246 units) or Italy (224 units), on the other hand, achieve a significantly higher degree of automation through the use of industrial robots.

Great Britain is the only G7 country with a robot density of 101 units below the world average (126 units) and thus ranks 24. The trend here is also upwards: five years ago the robot density in the United Kingdom was 71 units. The post-Brexit migration of foreign workers has increased the demand for robots in 2020. This development is likely to continue in the near future. The government is promoting the modernisation of the manufacturing industry through a massive tax incentive, called “Super Deduction”: from April 2021 to March 2023, companies can claim a 130% capital allowance as tax relief for investments in plant and machinery.

From a global perspective, China is developing the most dynamically: due to the very high number of installations, the robot density rose from 49 units in 2015 to 246 in 2020. This means that China is now in 9th place worldwide – a big jump compared to 25th place in the empire of Middle held five years ago.

Asia is also home to the country with the world’s highest density of robots: South Korea has held this position since 2010. The country exceeds the global average by a factor of seven with 932 units. The robot density has increased by an average of 10% every year since 2015. With its internationally successful electronics industry and the strong automotive industry, the Korean economy has two sectors that are among the largest customers for industrial robots.

Japan ranks third in the world, ahead of Singapore (605 units): in 2020, 390 robots per 10,000 employees were installed in the manufacturing industry. Nippon is the world’s leading manufacturer of industrial robots: the production capacity of Japanese suppliers reached 174,000 units in 2020. Japanese manufacturers now supply 45% of the world’s supply.

The robot density in the USA rose from 176 units in 2015 to 255 units in 2020. This puts the country in seventh place worldwide – ahead of Taiwan (248 units) and China (246 units). The upgrading of domestic manufacturing facilities has boosted robot sales in the United States. The use of industrial robots makes a significant contribution to achieving decarbonization goals, for example in the cost-efficient production of solar cells and in the further transition to electric vehicles. Several automobile manufacturers have already announced investments to equip their factories for new vehicle models with electric drives or to increase capacities for battery production. These major projects will increase the demand for industrial robots in the coming years.