More than just a machine-building exercise 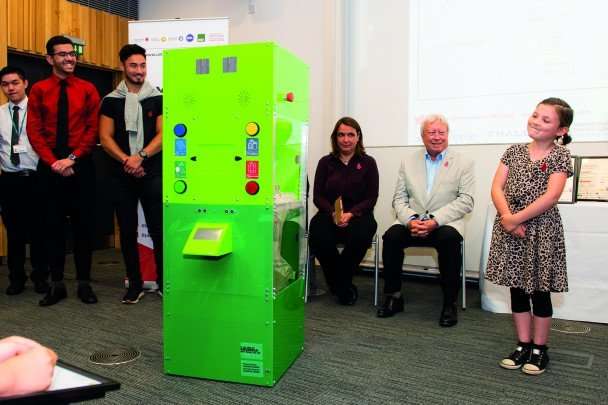 Bella designed the Fun Noisy Rubbish Bin as her entry into the Primary Engineer Leaders’ Awards 2017, a competition that’s been running for three years and encourages thousands of young minds to get active and come up with world-changing ideas. The competition culminates in an awards ceremony held in collaboration with Universities and engineers who give their time to grade the entries.

We may live in a world in which children see things through the lens of a super-charged smartphone, but when it comes to powering their imagination there is no substitute for good old-fashioned pen and paper and a healthy dose of support from networks of engineers and the education community.

What started off in 2017 as a concept to “help make children put rubbish in the bin more!” designed by Bella Hunt, an eight-year old school girl, became an eight month project which has led to a autonomous working prototype built by a team of student engineers at University of Southampton.

Bella’s idea for her “Fun Noisy Rubbish Bin” – a recycling bin that travels around playgrounds asking children if they have rubbish – was that by making a bin that is fun and interactive, children would put more rubbish in the bin and think more about recycling out in the wider society. The bin was uniquely designed to not only promote recycling but also to go on show to excite children about engineering.

Ahmad explained: “The aim of this project was to design and manufacture a fully functional prototype of an ultra-sustainable mechatronic bin – a bin that moves, talks and follows a path.”

The team’s approach was to research rubbish bins and child psychology related to recycling, and then get down to work with Bella to define the design parameters in more detail, establishing her motivation and desired application of the concept. Bella demonstrated a line-following toy which helped her to dream up the idea. The team at University of Southampton set to work through a number of iterations. Once these were tested, carefully chosen features were then manufactured. From the cutting of the Aluminium supports to testing the motors and creating the acrylic body, the students brought the talking bin to life within eight months.

Fran Fey at May Park Primary School, was impressed with the meeting between eight-year-old Bella and the university students who discussed the other elements of the design process which Bella hadn’t considered – the shape of the eyes, colour schemes, what shapes, colour sizes the button should be and where they could be placed. Fran said: “After the meeting Bella had obviously been thinking about her choices and several days later e-mailed back to the engineers the modifications after she had had time to mull things over. I know that Bella kept in touch with the female engineering student as she really looked up to her as a role model.”

Dr. Tim Woolman, design service experimental officer at the University of Southampton said: “Taking a child’s concept and making it reality is really valuable experience for engineering students as it encourages them to interact with a wide range of stakeholders, think widely around the problem, counsel the client, interpret the client’s design and work as a team to create something that is tangible and unique.”

The materials used were carefully selected to meet the “ultra-sustainable” objective of the project. The design was based on requirements set by the project’s stakeholders and meeting regulatory safety standards to be commercially viable. In encouraging recycling, the bin literally speaks for itself.

Dr. Susan Scurlock, founder of Primary Engineer and creator of the Primary & Secondary Engineer Leaders’ Awards said: “The Awards were created to engage children with engineering and help to ignite their understanding of how the world around us is created by engineers. The intangible, but equally important element of the programme is the development of the pupils’ interpersonal and communication skills when they interview an engineer, create their entry and then gain the recognition for their efforts.”

The Primary & Secondary Leaders’ Awards have just launched again across the country and engineers are being actively recruited to lend their skills locally to help change the lives of children by helping them understand that there is an engineer in all of us waiting to put their ideas into practice.