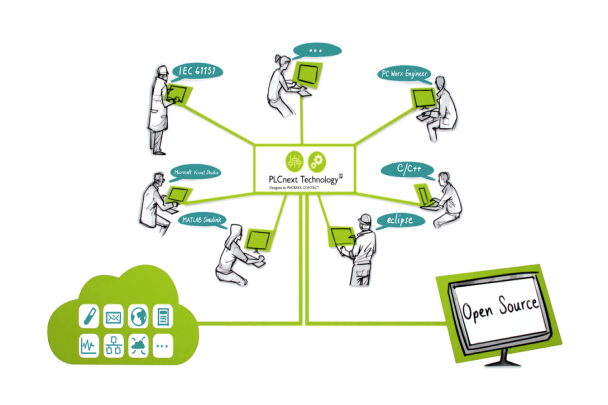 Of course some OEM / Integrators have used High Level Languages such as C#, or C++ to program applicaions but this meant using PC Based controllers rather than an industrialised PLC based system. This in itself was not such a big dilemma and with the emergence of ethernet based industrial networks became less of an issue.

Let us now move things on about 20 or so years. IEC 61131 still dominates the Automation Industry landscape, which is a testament to it’s strength and consistency. However the world of technology has moved on and so have the bright young minds emerging from our educational institutions. We are now at a point where we are talking about IIOT, Big Data, Apps, Cloud based Technology etc.

The engineering talent of today’s generation are not imersed in the nuances of IEC 61131 but more likely to be skilled in Highlevel languages.

This throws up a few questions.

Does this mean that the automation industry ignores and overlooks this rich pool of talent who are, after all the engineers of the future?

Does the automation industry intend only to retrain them in the “old and mystical art of IEC 61131” and put aside the technology of Industry 4.0, The Internet of things, Digitalisation?

Does this mean that we disregard the years of experience and considerable talent and skills of all of the older generations of engineers who are masters of IEC 61131?

How do we move forward incorporating the past the present and future techniques, technologies and Programming languages?

How do we bring it all together to exist on one off the shelf PLC hardware platform alreadly in use and avaiable that is constantly evolving?

With The PLC Next Technology Platform all of these and many more questions are answered.

Today the automation world is going through a paradigm shift this is because of the demand for digitalisation and flexible production processes. For example, being able to produce a batch quantity for as little as one personalised item, at no extra cost to the consumer. Can you imagine the commercial advantage this would give a manufacturer in a competitive marketplace?

As an automation integrator or as an end user,  to be competitive in a dynamic fast moving environment you have to be on the cusp of technology and take advantage of new innovations. Being able to recruit the brightest minds who are in step with the latest technologies will be the key to success in the automation industry moving forward.

The PLC Next Technology Platform offers a “Platform to Limitless Automation”

Here are the core value propositions of PLC Next Technology