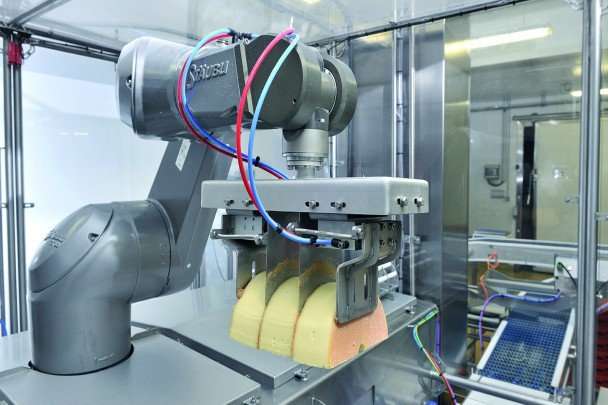 The global market for industrial robot systems is already worth more than $40bn, and could almost double again by 2020. As Tony Sacks reports, this growth is being driven by several factors including the emergence of new markets, such as SMEs, and the development of more flexible, easier-to-use technologies.

Except for a small blip in 2012, the number of robots installed globally has grown every year since 2009 and their sales are expected to continue growing at double-digit annual rates until 2020, at least.

Last year, global sales of industrial robots rose by 294,312 to hit a new record for the fourth year in a row. But there have been changes in what is driving this growth.

Traditionally, the biggest market for industrial robots has been the automotive sector. While it remains the biggest buyer of these machines – accounting for 35% of all robots sold last year – its growth rate dropped to a relatively moderate 6% in 2016.

The fast-rising star of the robot market is the electrical/electronics sector, which shot ahead by 41% last year, and is now breathing down the neck of the automotive sector, with 31% of the global market for industrial robots during 2016.

Because many of the electronics and electrical manufacturers are based in Asia – especially in China and South Korea – this region is leading the world in the uptake of industrial robots. Last year, China bought about 87,000 industrial robots – 31% of them coming from domestic suppliers – taking it close to the combined sales of Europe and the Americas (97,300). Some 30% of the robots sold globally during 2016 went to Chinese customers. And, by 2020, the IFR predicts that China will be using about 950,300 industrial robots – considerably more than in Europe (611,700).

South Korea is the world’s second-largest robot market. Substantial investments by its electrical and electronics industry resulted in 41,400 systems being sold in the country during 2016. Korea also has the world’s highest industrial robot density, with about 631 robots installed per 10,000 people employed in the manufacturing industry in 2016. The global average is 74.

Japan, for a long time the world’s biggest user of robots, before slipping back in recent years, experienced a rebound in 2016 with sales increasing by 10% to about 38,600 systems – its highest level since 2006. Japan remains the world’s leading robot manufacturer, with production more than doubling from 73,900 machines in 2010 to 152,600 in 2016 (equivalent to 52% of the global supply).

IFR predicts that during 2017, robot installations in the Asia-Australia region will expand by 21%. By 2020, it forecasts that about 1.9 million robots will be in use across Asia – almost equal to the total global stock of robots today.

The world’s five biggest markets for industrial robots – China, South Korea, Japan, the US and Germany – together represented 74% of total sales during 2016.

By contrast, the UK continues to languish near the bottom on the European league in terms of its uptake of industrial robots, although last year did mark the first rise in UK sales since 2012. According to the IFR, 1,787 industrial robots were shipped in the UK during 2016, compared to 1,645 the previous year. But the UK still lags well behind other countries in Europe in its use of these machines. Last year, for example, Italy bought 6,465 new industrial robots, France bought 4,232, and Spain bought 3,919.

Looking ahead, the IFR predicts that the UK industrial robot population will expand with a CAGR of 10% between 2018 and 2020, when the country is forecast to buy 2,500 new robots. This may be a faster growth rate than those predicted for Germany (6%), France (8%) or Italy (6%) during the same period, but in terms of numbers of robots expected to be shipped during 2020, the UK will still trail far behind Germany (on 25,000), Italy (8,500), Spain (6,500) and France (6,000). So the gap between the UK and other European countries in terms of the total number of industrial robots in use will continue to widen.

The IFR predicts that the number of robots sold in Europe this year will grow by 8%. Some of the drivers for this include: the use of robots to respond to faster business cycles; the need for more flexible production, tailored to customer demand; and the emergence of a new generation of industrial robots that will pave the way for increasingly flexible automation.

Steve Wyatt – an IFR board member who is group vice-president and head of marketing and sales at ABB Robotics – believes that industrial robots will be vital in tackling some of the challenges posed by Industry 4.0. He points out that the shift from high-volume/low-mix to low-volume/high-mix production is having a profound effect on manufacturing. In addition, many industries are facing acute shortages of skilled labour, rising wages and an increasing focus on safety.

An associated problem is that many younger people – the so-called millennials or digital generation – do not want to do the same types of work as previous generations. They not like what Wyatt calls “4D” jobs – dirty, delicate, dull and dangerous – and prefer more challenging jobs that use their cognitive skills. Robots are ideal for performing many of the jobs they are shunning.

The robot-makers sees a massive potential market for their products among the small-to-medium-sized manufacturers (SMEs) that make up 99% of companies in the EU and US, and account for around two-thirds of jobs in the private sector. At the moment, says Wyatt, “they struggle to deploy robots ¬– they find them too complex and difficult to use. They have a lot of competence, but not typically with robots.”

Simplification is therefore a key to expanding the SME market. Robots need to be easier to install, program and use. “These are things that our members are working on that will help us to unlock this opportunity and to move this industry forward,” says Wyatt.

For example, there is trend away from the need to write code to “lead-through” programming where the user simply guides a robot arm along the desired path.

Another way that some robot manufacturers hope to accelerate the adoption of robots by SMEs is to introduce new ownership models, such as leasing. They are also building condition monitoring and predictive maintenance into their systems, with the aim of boosting uptime, efficiency and productivity.

Another factor driving the robot market is the emergence of smart factories that link real-life manufacturing operations with virtual ones. Wyatt believes that vision and sensing devices, coupled with analytics platforms, will pave the way new business models and that machine learning will be a key driver for robotics developments in the coming years.

Robot manufacturers are already developing and commercialising new service models based on real-time data collected by sensors attached to their machines. The IFR predicts a rapidly growing market for “self-optimising” robotic cloud networks which allow the performance of individual robots doing similar tasks at different sites around the world to be compared. This information will be used to optimise parameters such as the speed, angle or force of their movements.

An allied capability is for robots to program themselves. Wyatt points out that a typical manufacturing cell can cost four times as much as the robot by itself, once additional costs such as grippers, feeders, engineering and installation are included. “There is a great interest to reduce costs and to get robots up and running a lot faster,” he reports. One way of achieving this will be to have cloud-based libraries of routines that robots can download and use to optimise their performance through self-learning. This will simplify set-ups and operation, and save costs and time.

The robot-makers also realise that it will become increasingly important for them to provide simple-to-use robots that can be integrated easily into standard production processes. Such developments will allow industrial robots to be deployed in a wider range of industries to sustain efficient and flexible manufacturing.

At the same time, the emergence of collaborative robots (cobots) is shifting the traditional ideas of which activities can be automated. As low-volume/high mix becomes the new normal, cobots will increase manufacturing flexibility. Wyatt believes that collaboration is changing the face of manufacturing.

All of this translates into big business. In 2016, global revenues from sales of industrial robots rose by 18% to hit a new peak of $13.1bn. If the costs of software, peripherals and systems engineering are included, the market is worth about three times as much. This means that worldwide market for robot systems is now worth more than $40bn.