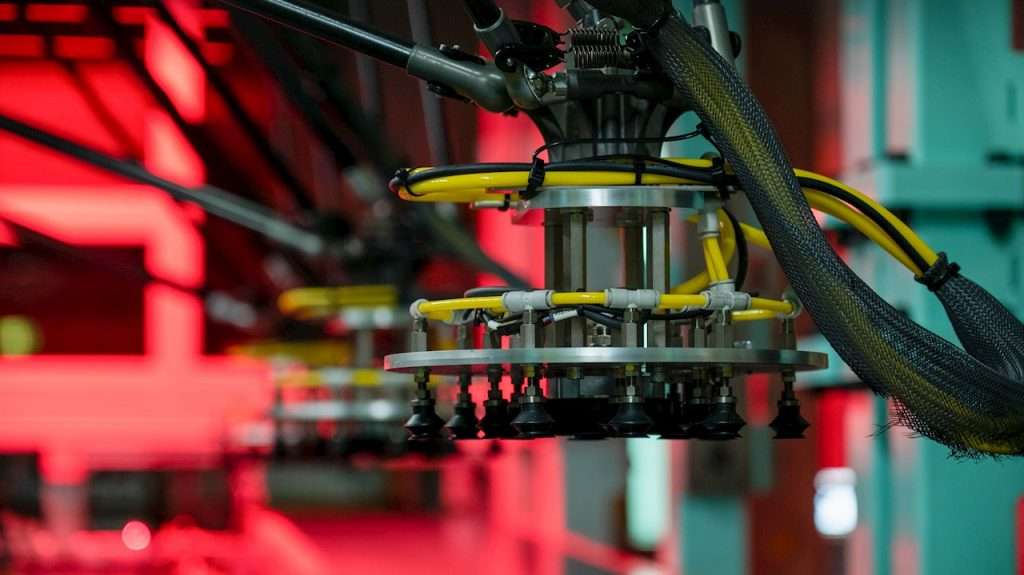 When it needed to increase production, while relieving workers of heavy lifting and a challenging inspection job, Japanese manufacturer G-TEKT turned to ABB robots. The result was an automated system that frees up workers for other tasks, while maintaining quality and boosting production.

The production process involves a 500-ton press punching out blanks for transmission components from steel sheet. Two workers per shift would visually inspect each punched piece for scratches, dents, and other minor defects. The 42 types of blanks weighed up to 2.3kg and some were over 300 mm long. Each person had to load them onto pallets at a rate of about 40 sheets per minute.

These tasks were very challenging for factory workers, involving intensive visual inspection and handling of heavy blanks. G-TEKT wanted to introduce automation that would help improve quality and productivity while shifting workers to less demanding and more creative tasks.

Several requirements for the automated system were identified, including fitting into the limited space around the press, the ability to increase production capacity and the need to handle a wide variety of products.

System integrator MES Koshin was asked to lead the implementation of the system. The company assessed the needs and challenges of the proposed automated solution, which included limited space for the entire automation system around the press and space constraints limiting the number of robots.

Due to the limited number of robots possible, the reach of each robot would need to be approximately 1200mm. The system would also need to support more than 40 different products, with weights ranging from 0.4-2.3 kg, and dimensions of 120-330 mm at a plate thickness of 2-6 mm.

Working with ABB, MES Koshin tested several arrangements of different numbers of robots. The ABB FlexPicker was the only option that met the system concept of a payload of at least 5kg and a working range of at least 1200mm. MES eventually settled on three ABB IRB 360 FlexPickers with a 6kg payload and 1600mm reach.

The system also uses the ABB PickMaster 3 software. Designed to control multiple robots, PickMaster 3 makes full use of the capabilities of all three robots in the system, minimising the number needed and helping save space. To prove the system design was viable, MES Koshin used ABB’s RobotStudio Picking PowerPac simulation software.

“G-TEKT and MES Koshin looked at the unique characteristics and range of FlexPickers. Together with the PickMaster 3, they have enabled to create a system that maximises the capabilities of the ABB robots. We would like to thank G-TEKT and MES Koshin for their efforts.” says Shuichiro Nakajima, Head of Robotics & Discrete Automation Business Unit, ABB.K.K.

“In this project, we worked with MES Koshin to refine the final specifications, discussing the number of robots and how to meet the challenges and constraints of installing the equipment. Space and speed  were very important issues for us,” says Akio Kato, Plant Manager of the Tochigi Plant, Production Division of G-TEKT Corporation, who led the project for the end customer.

The automation processes are divided into two sections: the visual inspection process and the loading onto the pallets. The visual inspection uses AI-based equipment to give a resolution as close as possible to that achievable by a human eye, without being dependent on the operator’s skill level and physical condition.

Yoshiaki Ozawa, Director, Sales Manager and Production Manager at MES Koshin, said: “We used RobotStudio and Picking PowerPac to carry out a number of simulations to check the feasibility of the system, and finally were able to finish the operation on site and achieve a production volume that even exceeded our expectations.”

“In order to cope with the large number of products, 17 vacuum cups are arranged in a row and each of them can be switched by one hand. We have even managed to set up the system so that the robot does not stop tracking when a worker is present to retrieve and change pallets,” Ozawa added.

Commenting on the benefits of the automation project, Kato commented: “Firstly, we were able to automate the work of four workers in two shifts, allowing us to free up these employees to do more creative work. In addition, productivity has increased by around 10 percent, and we can now produce around 19,200 more sheets per day. From a view of an operator, I believe it’s important that the equipment doesn’t stop, that it doesn’t break down, and that it’s easy to maintain, and they’ve achieved all of these at a very high level.”

Looking to the future, Ozawa concluded: “We have learnt a great deal about the range of tasks that can be carried out by robots to replace people. We look forward to working with ABB to build more equipment with full of ideas for a variety of production sites in the future.”

ABB will continue to work closely with MES Koshin to meet their expectations and help G-TEKT realise the next generation of production facilities.