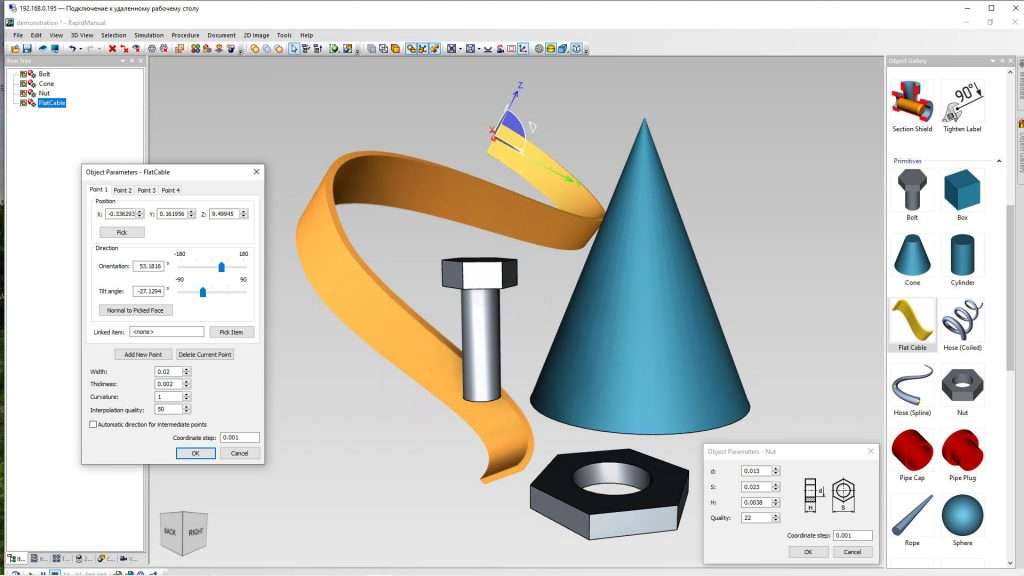 Cortona3D has released a new version of RapidAuthor 14.0.1, a software solution for creating interactive documentation for manufacturing and after-sales support.

The RapidAuthor gallery of parametric objects has been expanded with a flat cable, plugs, a bolt, a nut and, several other objects, operations with which are often found in assembling, maintenance, and repair instructions. Demonstrating cable connection or plug installation is now much easier than before.

Users who develop documentation following the S1000D standard now can check data modules for compliance with BREX requirements, automatically create and update service data modules, and publish documents consisting of several S1000D modules in PDF format (previously only publishing in HTML was supported). Several features have been implemented for creating documents based on DITA Map when using RapidAuthor in the Teamcenter environment. The structure of these documents and their topics can be edited in the Teamcenter rich client or Active Workspace.

The 2D Image Editor has a powerful new Pen tool for creating Bezier curves. In addition, the concept of working with styles has completely changed, which significantly speeds up the work of the illustrator. All styles are divided into four groups: stroke, fill, text, and complex styles. Applicable style can be assigned to all selected objects simultaneously, there is no need to edit each object separately.

Another important change regarding the convenience of working with styles: the user can link styles in pairs and then quickly switch between them, for example, between thin and thick lines or custom colours.

Support for DirectX 11 and ambient occlusion has made it possible to automatically create raster images with realistic shading from 3D models.

RapidAuthor 14.0.1 also contains numerous interface and performance improvements based on feedback from customers who use RapidAuthor in their daily work. These improvements are related to project administration, video recording, update procedures, 3D object operations, and data import.