The art of stacking 3D printers 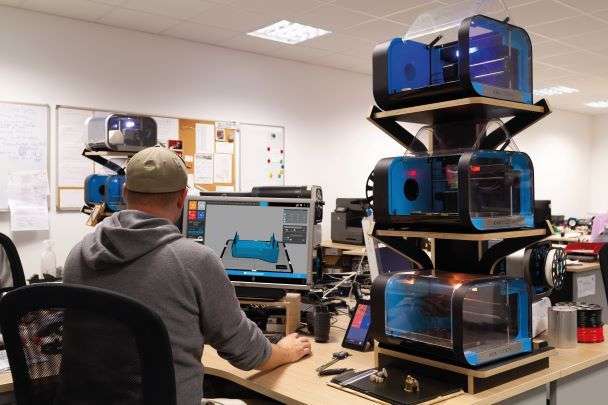 Chris Elsworthy, CEL-UK’s MD and lead mechanical engineer, explains what it takes to stack printers effectively and how design workflows can benefit from this simple yet innovative approach to 3D printing.

The art of stacking 3D printers: how SMEs can achieve faster and more affordable rapid prototyping

3D printing is too often seen by Small to Medium Enterprises (SMEs) as a technology beyond their reach. There is, however, a simple way to challenge this assumption and make 3D printers more accessible to companies of any size: it’s called stacking.

Businesses in the UK, particularly SMEs, have generally been quite slow at adopting 3D printing. And many cite cost and lack of skills as two of the main barriers standing between them and this technology. Stacking 3D printers, however, has the potential to help SMEs boost speed, efficiency and accuracy in 3D printing at a cost they can afford. But what is a 3D printer stack? And how does it work?

Essentially, stacking means connecting several smaller 3D printers instead of using just one larger machine. The printers are normally placed one on top of the other and files can be sent to each of them in turn using the same interface, through a network or a connected workstation. There are at least five valid reasons why a similar setup can be a great fit for SMEs.

It may sound obvious, but smaller, stackable 3D printers are generally cheaper than larger machines. An average SME could easily buy several small 3D printers – perhaps even three or four – for the price of one large machine and expand its 3D print capacity as needed. In this way, it can scale according to its prototyping printing needs. Additional printers can easily be integrated into an existing network and controlled through one interface.

A networked, stacked system is generally faster than individual 3D printers, which can help SMEs boost efficiency and productivity.

Firstly, a stacked system enables several people to use 3D printers at the same time without having to wait in a queue of engineers. With a couple of stacked 3D printers on their desktop, a design engineer can try out different ideas, tweak them and set the next print going, evolving the design as they go. This not only enhances speed, but also accuracy in design.

Secondly, stacked 3D printers can speed up the overall design workflow by ‘spreading’ risk across multiple machines. Normally, if a print fails on a large platform all you can do is restart the whole process from scratch. If, however, that print is spread across multiple platforms then only the print that fails will need to be restarted while the other printers will continue at speed. A large print can, for example, be split into smaller prints, across multiple machines, and reassembled at the end.

Space is often a precious resource in small-to-medium industrial facilities and keeping machine footprint to a minimum is a priority. This is where stacked systems come in.

A 3D printer typically has a substantial footprint and even a small one is roughly the same as an average 2D printer. Stick two on a desk and space quickly starts to run out, three and it’s time to move. If, however, they are placed one on top of the other footprint will be kept to a minimum. All that’s needed is a ‘piece of furniture’ such as CEL’s Stacker for desktop or a floor standing Tree. For a stack to work smoothly, however, printers will need to feature an enclosed design and filament reels that are easily accessible on the side.

4. Anyone can be a 3D printing pro

A stacked system can be very easy to install and use even without previous experience in 3D printing.

Once the stack of 3D printers is in place the next step is connecting each of them in a network. All it takes is a network-enabled device such as Root acting as a hub. This enables each of the printers to communicate with the software so the user can select what models they want to print on each machine.

With the right 3D printer software in place, using a stacked system becomes even easier. The software’s main role is to communicate with the hub and send the print information through to each of the printers. To make things easy a secondary touch screen device can be added. For example, Mote is a small interface that includes the Robox Root system.

Once connected, some of the latest software enables users to control each of the printers separately. Switching between print platforms and setting jobs running becomes extremely easy.

With a network-enabled hub in place, it also becomes possible to handle control from other workstations, in the same way you would do with any standard network printer.

Some of the latest software also makes it easy to change materials and print quality, ensure that material levels are sufficient for the print and monitor the print as it’s going.

Stacking 3D printers is straight forward and once all the component parts are in place, anyone who’s able to plug and connect a standard 2D printer should be fine with the process.

For anyone worrying about space, furniture such as the Stacker and Tree systems have been designed to keep things neat and tidy. As each printer sits atop the next the entire stack retains the small a footprint of one printer, so a stack can sit on your desk and integrate with your workflow.

The 3D printers used in stacked system are intentionally small, but, after all, the vast majority of prints have a footprint smaller than an A5 sheet of paper. Even when it comes to larger models, they can always be divided and printed in sections.

Small print runs can spread across several printers at speed without the usual slowdown of the print head having to move between multiple parts on a larger platform. And, if anything fails, restarting half or a third of the print, depending on how many printers there are, will only slow down the process marginally. The latest software makes it possible to easily start and stop prints as well as monitor their progress so that downtime is kept to a minimum.

Ultimately, a stack is quite easy to create and inexpensive compared with larger printers. It can help SMEs increase reliability, accuracy and speed making rapid prototyping even more rapid.